I first traveled to Chile in 2005 on Microsoft business and then again in 2011 for a family holiday. In my work for Capria, I’ve been to Santiago at least five times over the past three years, focused on fundraising for our global efforts and on selecting and supporting a great local fund manager to be a part of the Capria Network (we found one – Fen Ventures, a joint venture with LarrainVial, one of the largest asset managers in Latin America). I have also visited to support planning our Latin American office to be based in Santiago starting in H1 of 2020, and I’ve visited our partners in Mexico, Colombia, Peru, Brazil, and Guatemala many times in the past few years. I’m a long-term investor and am fully convinced that more public and private support of entrepreneurship can help address some of the issues exposed by the extreme protests in Chile and elsewhere in Latin America. 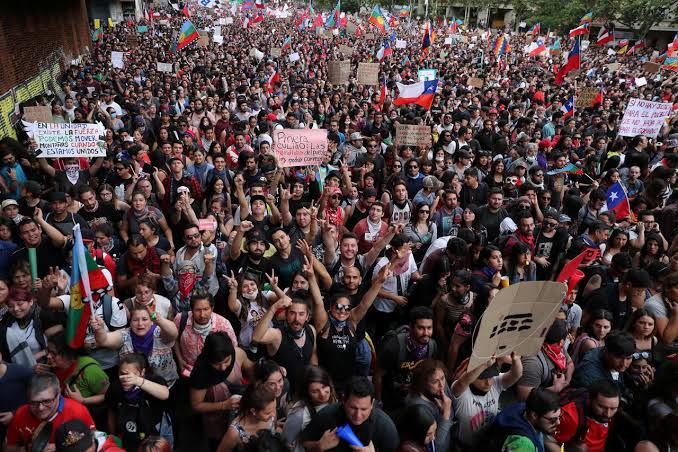 Our most recent trip was planned over eight weeks ago, well before “Chile changed” on October 18, the day peaceful protests turned violent in Santiago. Nobody predicted these extreme protests, nor, to the best of my knowledge, has anyone claimed to fully understand the depth and scope of the issues even to this day. I will not recount the specific events that have transpired so far – you can find them summarized in what currently appears to be a relatively neutral piece on Wikipedia.

A big question for us at Capria immediately after the violent protests began was, “should we cancel?” This question became more pertinent when the APEC conference that was to host 30+ global leaders was canceled, along with the UN Climate Change Conference COP and the Global Steering Group meeting for impact investment. But after much discussion and speaking with our local contacts, Juan Luis Palma (our Regional Director who also is a Chilean) and I decided we’d go forward with the trip, with reasonable confidence we could steer clear of areas with active protests.

Chile’s Situation Is Why We Need More Impact Investing (Everywhere)

Why go to a city in the midst of the greatest protests since the times of Allende, with worse public violence than was seen under Allende or Pinochet? My simple answer was “If not now, when?” We are global impact investors. What we do is to work with local fund managers and investors to support entrepreneurs who build profitable and scalable solutions to exactly the types of problems that are causing unrest in Chile today.

No, we don’t make subways cheaper, we are not making pension funds pay more fairly, and we as an industry are not going to provide any short term solutions. But we are in the business of supporting local sustainable development via companies that deliver solutions for financial inclusion, education, health and other needs of low- and middle-income populations. And we look to improve the environment for all. Medium to long-term, impact strategies can make a big difference. Done right, entrepreneurship can transform societies for the good.

Juan Luis and I concluded that there would be no better time to go and continue the discussions around impact that we’ve been having for over two years with wealthy business leaders, family office CIOs, and entrepreneurs about exactly these topics. We had no idea if our conclusion would turn out to be right or wrong. As we tested the idea of visiting vs. canceling, about half thought it was great that we were coming, and half thought people would be too distracted by the issues at hand to discuss impact investing from a global context.

Arriving in the Midst of a Complex Situation

Spoiler alert: I’m glad we went. Discussions were complicated but very worthwhile. Please note: the opinions and reporting herein are mine, a dispassionate outside observer to the complexities of this situation; they don’t necessarily reflect those of our local partners.

In between many meetings over four days, I did my best to try to understand the unrest. Juan Luis and his extended family were good sources, as were entrepreneurs, Uber drivers, and others I met casually. The English-language press is not great; there is still much less coverage than I would have thought. For example, I didn’t find any articles pointing out what locals told me — that protestors were using paintball guns and lasers to make it difficult for police water cannon vehicles to intervene when crowds got violent. Or that prospective new investors in some Santiago-based startups have pulled back, waiting to see companies diversifying further across Latin America. Or that the police stations are under attack and police don’t have the power to respond to the protesters, while at the same time are accused of abusing power. Or that a large local pension fund we visited had covered up its name at the top of its building to avoid advertising itself as a target for protestors. The list of complexities is long.

Without placing any value judgments on the following, based on what I’ve read and heard first-hand, my understanding of the peaceful protesters’ view is that lower-income and young people feel that:

The “we need a new constitution” took up a lot of airtime and will apparently be acted upon, but this is not something that the ordinary protesters had concerns about – most had never read the constitution, and the locals I asked who were knowledgeable about the constitution said that while it has a demonstrably dubious origin during the Pinochet dictatorship, it does not have known big flaws, and it has been improved many times post-Pinochet. 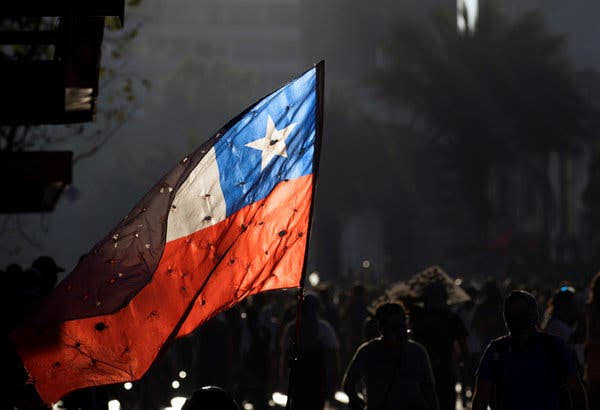 It’s also notable that there appears to be two very different classes of protesters – those that are peaceful and protest on scheduled times during the day, and those that are violent and come out more at night. There is a view – but not one I’ve seen substantiated anywhere yet — that the violent protesters are made up of and/or supported by far-left communists, anarchists, narcos, and/or foreign actors, using what might be otherwise civil protests to pursue their extreme agenda. The line between peaceful and violent protesters are blurry; nobody really knows how to differentiate among them.

As you can see, the list of issues is not a simple list to address, in the best of times.

It’s broadly agreed that the government must be the primary agent of change to address both the peaceful and violent protests. At the same time, the business leaders and high net worth individuals we met with had thoughtful and interesting perspectives. The first, which came through in nearly every conversation, was a feeling of sadness – that the Chile they knew and loved is not what they thought it was and that there may be a “new normal” that’s very hard to accept.

Another response, which came through in many but not all conversations, was that the actions the government has ostensibly moved quickly to take (including replacing most of the cabinet with younger people, agreeing to the constitutional convention, etc.) are not enough, and that they [business leaders] are going to have to start doing things differently, investing in the betterment of Chile, and not relying solely on the political process to fix the deep wounds of society.

Quoted in November 24th WSJ, a leading family businessman Bernardo Larraín Matte [who we did not meet with on this trip] said “We need to multiply our philanthropy; I think we have to show more humility.”

I was pleased to hear the attitude of business leaders, as it was not a given that individuals of their stature and wealth would be ready to say they should be part of the solutions. Five weeks into the crisis, there is no consensus on action, but the concepts of impact investing that we’ve been evangelizing were well received as longer-term solutions that need to be embraced along with politically-driven near-term fixes for pension reform, taxes, etc.

Conclusions for Chile and for Latin America and Beyond

It’s still early in what will clearly be a long road to recovery for Chile. Protests are continuing in multiple cities. There are many unknowns, such as how much of the violence (including the coordinated highly destructive attacks on subway stations) was organized by and is still being driven by destabilizing foreign agents. It’s unclear if or when a unified leadership will emerge to lead and hopefully negotiate peace between protestors and authorities. The November 22 report from Amnesty International is disturbing, alleging extreme police violence, rapes, and more. I can only hope that these are isolated incidents and that any perpetrators will be brought to justice. At the same time, there are numerous reports of police who are doing their best to confront the violence and criminality are being attacked by crowds and severely injured – some see them as heroes for not fighting back to protect themselves. The overall concern of the situation is clear and omnipresent; it’s in nearly every conversation.

All this negative news – much of it undoubtedly based in reality, but some of which may well be “fake” — is in stark contrast with the social and economic fundamentals that have improved so much for Chile. A recent op-ed in the NYT pointed out more optimistic facts: 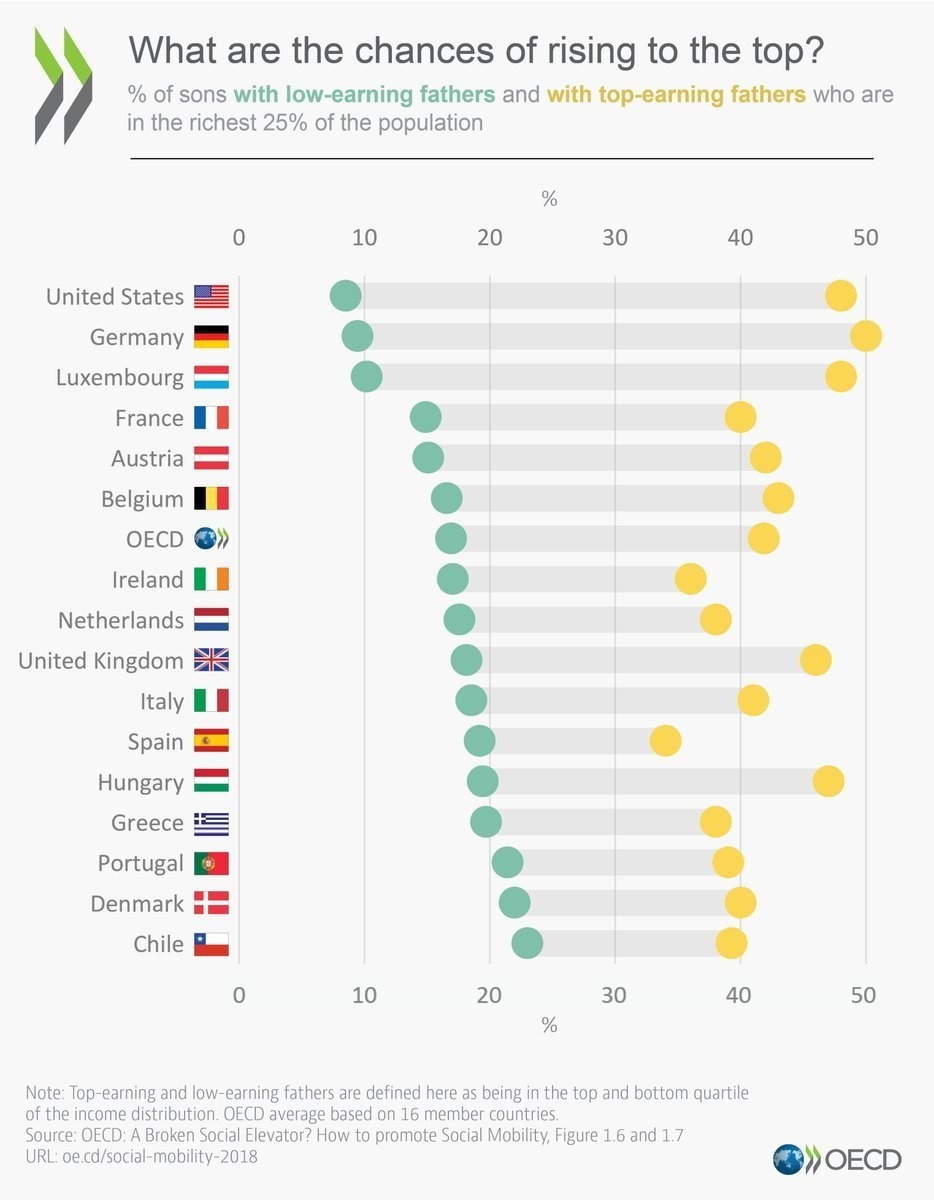 Few regions in the world are as unequal as Latin America. Out of the 20 most unequal countries worldwide when measuring income inequality on the Gini Index, 8 are Latin American while the rest are in Sub-Saharan Africa. On average, the region has a Gini Index of 41.0 compared to the OECD’s average of 31.8, per the World Bank’s 2018 book Wage Inequality in Latin America. Chile stands at 8th place in the region (worse to better) after Brazil and Colombia for example. Chile’s Gini Index went from 57.3 in 1990 to 45.9 % in 20181.

Families in several countries are increasingly trapped on the bottom of the social ladder. Children born into low-income families have less chance of moving up in and improving their professional status. Meanwhile, those at the top of the income ladder are holding on to their wealth. Compared to several developed countries and OECD average, Chile has actually done well in terms of social mobility. As the graph shows, within the 25% richest population, Chile has a higher percentage of people coming from low earning fathers in comparison to the other countries listed, and a lower percentage coming from top-earning fathers when compared to most of the sample.

Chile clearly has a long way to go to both end the violence and move back towards what it once was – the most prosperous and stable country in Latin America. I remain hopeful but cautious. And I hope that other leaders across Latin America (and frankly, most everywhere other than maybe Northern Europe) will take the happenings in Chile, Colombia, and Bolivia as serious signals that can’t be ignored, that require tough political discussions, and that demand both business and political action. And they all can benefit from more global, regional, and local support of inclusive development through entrepreneurship. This is what impact investing is all about.

To sum up Capria’s view on Chile: I was interviewed for a major business newspaper in the midst of my trip and asked if we are still planning to open our LatAm office there next year. I answered unequivocally “yes.”

References:
1The Gini index is a simple measure of the distribution of income across income percentiles in a population. A higher Gini index indicates greater inequality, with high-income individuals receiving much larger percentages of the total income of the population.