Funded by Bill Gates and others, Capria was founded in 2012. Expectations are that Capria’s investments could reach USD $500 million in five years.

With cumulative assets just under USD $90 billion, Bill Gates, Co-Founder of Microsoft began donating large sums of money to charities, focusing on those related to eradicating diseases such as polio and malaria, as well as bringing technology closer to the “Bottom of the Pyramid” population, as a way to facilitate entrepreneurship that helps develop local communities.

It was this common vision, in making a change through technology-led businesses, that led Gates to Will Poole, a close associate and former Corporate Vice President of Microsoft’s Unlimited Potential Group, who donned the entrepreneurial hat and founded Capria in 2012 – an investment firm that acts as a business accelerator in areas where high social impact can be achieved, with operations in Seattle and Bengaluru, India.

“While I was working with Microsoft, one of the things I wanted to focus on was how to open new markets and include those who didn’t have access to technology. Bill Gates always supported that concern,” said Poole, recalling that after Capria took its first steps in India, Poole decided it was time to call Gates.

He added, “I told him about what we were doing, which was extremely different from what we were used to, like changing Windows’ elements and similar things. We were looking to bring technology and financial services closer to entrepreneurs. Bill immediately agreed to invest and more importantly, to share his name publicly, which isn’t something he always does. And the reason was that he strongly believes in the possibility of finding scalable solutions, that diminish inequity in fundamental aspects such as health, education and more.”

Poole recently visited Chile and met several fund administrators and family offices. He was “pleasantly surprised” with the high interest Capria generated and estimates that in the short term, they are likely to have few partnerships finalised. 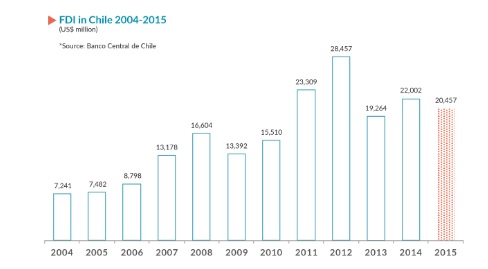 According to UNCTAD’s World Investment Report 2015, Chile ranked as the world’s 11th largest recipient of foreign direct investment (FDI). Chile has also trade agreements with over 60 countries, expanding its domestic market to ~63% of the world population.
(Image Courtesy – InvestChile)

Despite Chile’s small market, when compared to larger economies such as Brazil and Mexico, Poole estimates that there is a great opportunity for Chilean and foreign high-quality enterprises – to raise funds and invest in companies.

“There is an important factor that makes this country extremely interesting – the trade agreements that it maintains with more than 60 countries, effectively extending its reach to more than half of the consumers of the world,” he emphasized.

Over a period of five years, Capria plans to make investments that exceed USD $500 million globally, of which USD $100 million will be invested by Capria, and the rest from external investors.

One of the companies where a fund that Capria has partnered with has invested, and of which Poole speaks with great pride, is Guatemala-based Wakami which employs local women from rural areas for making handmade jewellery that is sold across 24 countries. He further said, “Wakami’s core idea is to empower women, who in most cases, are the ones supporting their homes. They started working with 50 women. Today, they employ hundreds, sell the jewellery on e-commerce giants like Amazon and various other channels. The lives of these women have changed; this is a sign of the difference that can be made,” said Poole.

This article was first published in Spanish, on Diario Financiero. This is a translated version of the same.